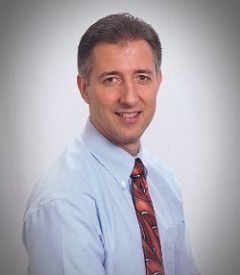 My father had a herniated disc in his neck that was causing him neck and arm pain.

He didn’t think much of chiropractors so he went and had surgery. After the surgery, he still had neck pain and couldn’t move his neck. My cousins recommended he come to Ravenna to see their chiropractor, Dr. Christensen. My dad was very skeptical, but in a short time, my dad’s pain was gone and he regained his neck movement. Dr. Christensen then explained that chiropractic isn’t just for people who were hurting. He suggested that the entire family come in because if the body’s vital organs and other tissues and glands were not receiving the signal properly from the brain, it would set the body up for all kinds of future problems. So, periodic spinal alignments would keep us healthier.”

Dr. Bill stated that “Upon entering college I found out that after my 4 year BS degree, I’d need to go toChiropractic College for another 5 years. That was 9 years! Way too long for me! So I got my degree in Electrical Engineering at Grove City College. However, after working 3 years at the Nuclear Power Plant, changing jobs three times and still not liking what I was doing, I knew I had to find something else.” Dr. Bill stated that his cousin who was a student at Palmer Chiropractic College in Los Angeles came to visit. He was raving about how awesome chiropractic college was. “That one visit changed my life. I knew that at 25, if I went tochiropractic college for 5 more years, I’d still have 35 or more years to work, so I better get started on doing what God called me to do. Care for his sheep.”

Dr. Sopchak chose to go to the National College of Chiropractic. “They were the best at training chiropractors to diagnose. So I figured, if you can’t diagnose the problem, how can you fix it?” Dr. Bill then completed the 5 year program in just under 4 years. That meant 24 – 30 credit hours per semester, plus a part-time job, and no summer breaks. His courses included biochemistry, endocrinology, pathology, a major emphasis on anatomy and human physiology, X-ray, physical therapy, diagnosis, chiropractic adjusting techniques and patient care in the National College of Chiropractic Clinic, and Salvation Army Clinic downtown Chicago. Dr. Sopchak was also a teaching assistant in the Gross Anatomy labs, Biomechanics labs, and Adjusting labs. He graduated in December 1991 with a Bachelor of Science in Human Anatomy and a Doctorate in Chiropractic.

After graduation, Dr. Bill first associated for almost a year with Dr. Gary Estadt in Mentor before establishing his own practice in Painesville in 1993. Dr. Bill has always been an electronic nut. He has maintained that trait of always being on the cutting edge of technology. “We utilize the Erchonia cold laser at our office. It’s the same one Lance Armstrong uses. It emits energy at 635nm. The same frequency your cells vibrate at when they’re healing! So it re-modulates those cells vibrating at a different frequency to the healing frequency. This produces a 25% – 60% increase in the speed of healing!”

“I love treating kids. They tend to respond so much faster than the adults. I also enjoy the challenge of the patients who have been to see everyone else before coming to my office. The chiropractic adjustment re-ignites the nervous system and we get to see some amazing recoveries by people who the medical field has written off.” “I also love the skeptics,” smiles Dr. Bill. “I know how skeptical my dad was when he went to the chiropractor for the first time. So we make it a point to show a short 4 minute video about chiropractic, and explain everything in advance, answer questions and attempt to over communicate. Patients appreciate that.”

Over the past several years, Dr. Bill has spent tens of thousands of dollars each year to learn more to help his patients than the traditional structural based chiropractic. Dr. Bill has been certified in the Brimhall Wellness technique, he’s had extensive training in Dr. Freddie Ulan’s Nutritional Response Testing, and further Nutritional studies through numerous seminars each year. Dr. Bill stated “Restoring the structural integrity of the body is the foundation of chiropractic. But, if the body doesn’t have the proper nutrition to hold the adjustments, or there are heavy metal or chemical toxicity burdens, the body can’t heal properly and will maintain a fertile environment for disease, and the majority of all diseases are due to what we put into our bodies. We really are what we eat!”

Dr. Bill met his wife Linda in a wedding of their college roommates. They were married in 1988, and they have three children, Adam, Josh & Matthew. Matthew has never been vaccinated or received an antibiotic. (If that sounds interesting, be sure to ask Dr. Sopchak to explain!) Dr. Bill enjoys playing with his kids, coaching baseball, and reading. He loves to read to enhance his faith and trust in God, and anything pertaining to nutrition and wellness.

“I believe that given the right environment, the body will restore and heal itself. In fact, the body replaces itself every seven years. I was under-educated on the issue of vaccination and the mandates that the state requires. But my youngest son has not, and will not be vaccinated!” Dr. Sopchak eats mostly organic foods, and has minimized the starchy foods (Potatoes, pasta, rice and bread) to maintain his health. He also works out regularly at home with his wife and gets weekly adjustments to keep his nervous system running at optimum potential.

“Enough about me! How can we help you with today’s safe and natural chiropractic care? Give us a call or click on the Email the Doctor button found at the bottom of the page so we can help you take your first step towards better health.”

Are you suffering from Neck Pain, Back Pain, Shoulder Pain, Headaches or other Nerve, Sports or Accident related Injuries?

Are you searching for Family Wellness, Pediatric Chiropractic, Performance Based or Natural Holistic Care?


©2020The Family Practice - All Rights Reserved

Powered By The Family Practice, Inc.